Major depression is one of the most common mental illnesses facing Americans. For some, the disorder can be effectively treated by conventional approaches, like talk therapy and antidepressants. For others, however, their symptoms persist through several different treatments, affecting their quality of life.

New, alternative methods of treatment can offer hopes for these people. Transcranial magnetic stimulation (TMS) is a new approach that has been pioneered over the past few decades. Today, it’s becoming a more conventional approach for treatment-resistant depression.

Here’s how transcranial magnetic stimulation works, and how it can help people with depression when other methods of therapy have failed.

Transcranial magnetic stimulation is a therapeutic approach to depression that uses magnetic devices to stimulate nerves in regions of the brain associated with mood regulation. The technique is typically only used when other methods to treat depression haven’t been effective.

During an average TMS session, a TMS practitioner uses an electromagnetic coil device to send a series of magnetic pulses to a patient’s brain. It’s often called rTMS, or repetitive TMS because the practitioner will send these signals repeatedly throughout each session. The average session usually lasts between 30 to 60 minutes. 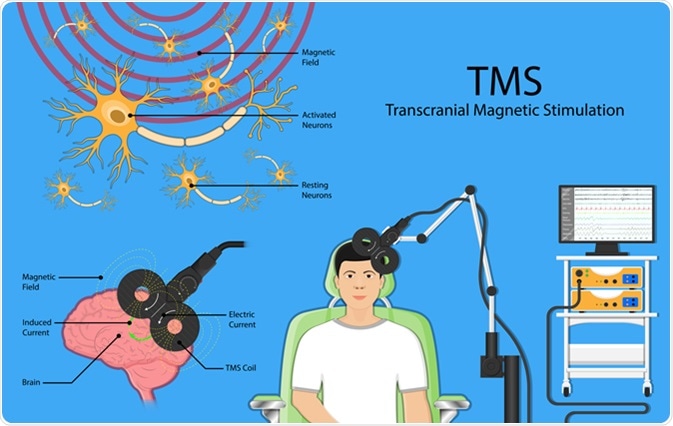 Results can be felt immediately. Many patients, however, will need several weekly sessions over three to seven weeks before experiencing significant relief from their symptoms.

In most cases, TMS doesn’t require anesthesia. The therapy also very rarely causes serious side effects — most commonly, patients report headaches during or after treatment. People can typically drive themselves to and from TMS sessions.

TMS is sometimes confused with electroconvulsive therapy (ECT, or sometimes “shock therapy”), the traditional approach to treatment-resistant depression. Unlike ECT, however, TMS doesn’t appear to affect memory or cognition negatively.

Can TMS be used to treat depression?

Like many depression treatments, it’s not fully understood why TMS improves symptoms. Right now, psychologists believe the mood benefits associated with TMS may be due to improved activity in regions of the brain that are affected by depression.

In any case, TMS has been found to be an effective method in managing the symptoms of treatment-resistant depression.

One of the most extensive trials on TMS found that 47 percent of patients with treatment-resistant depression responded positively. Of those, nearly one-third experienced a full remission of their depression. While these results aren’t always permanent, the mood benefits associated with TMS usually persist for many months after the end of treatment. On average, patients will experience more than a year of improved symptoms after completing a series of TMS sessions.

Patients who find that the effects of TMS have worn off can undergo further sessions, which almost always provide similar improvements. Follow-up rounds of TMS typically require fewer sessions than the initial treatment. While TMS is a relatively new approach to treatment-resistant depression, some patients have been receiving regular TMS follow-ups for as long as a decade. So far, there is no evidence that it becomes less effective over time.

Because it’s rare for patients to have adverse reactions to TMS, their symptoms rarely or never worsen following or during treatment.

There’s also a limited but growing body of evidence that suggests TMS may be useful in treating mental illness other than depression, like pediatric depression, bipolar disorder, and PTSD. However, TMS isn’t approved yet for treating these conditions — future research is necessary.

Many Americans, unfortunately, have to deal with the struggles of major depression. While some people can find relief in traditional therapeutic approaches, like talk therapy and antidepressants, others don’t.

Fortunately, treatments like TMS have been shown to help those with major depression that hasn’t responded to other forms of treatment. The approach has been found to be effective for more than half of all patients with treatment-resistant depression.

The effects of TMS don’t last forever but can be sustained with follow-up sessions. People who respond to TMS the first time almost always respond well to future treatment.

This means that for many, TMS may be an effective, long-term approach to treatment-resistant depression. This is good news for anyone suffering from the crippling effects of this mental health disorder.